Hahne Estates Winery | About Us
18
page-template-default,page,page-id-18,ajax_updown,page_not_loaded,,normal,shadow3

Hello, my name is Gary Hahne, owner and winemaker at Hahne Estates Winery.

I started making wine with my Grandfather when I was 5 years old. Making wine and beer helped me pay my way thru College and Law School. It has always been a passion of mine. When I quit practicing law, I spent 2 years in school studying winemaking and then another 2 years studying Viticulture. I am now pursuing a Certificate in International Wine Law. Now that I have completed the opening of our Hahne Estates Winery, the fun has started. However, I’ve probably never worked more hours in my life but I’m enjoying every minute of it. If you come visit me, I will make sure you enjoy it as well.

My parents were friends of our 36th President, Lyndon Baines and Lady Bird Johnson and catered huge barbecues and other events at the LBJ Ranch (located just 15 miles from Johnson City), now a National Historic Park.

During LBJ’s presidency (1963-1969), Associated Press journalists stayed at our family’s motel in Stonewall, Texas. The photographers built a darkroom there and would toss the unneeded black-and-whites of LBJ and others into the trash. My father saved the old images, and now they line the walls of our tasting room. These rare photos and a scrapbook that Lady Bird gave my mother, along with personal correspondence from the Johnsons, help paint a rich picture of their deep connections to the local community. But, unlike a museum, you can learn all of this while sipping one of our five tasty Hill Country wines.

Hahne Estates Winery is committed to celebrating the fruit of the vine by producing quality wines.

Our motto is: “Quality not quantity.” 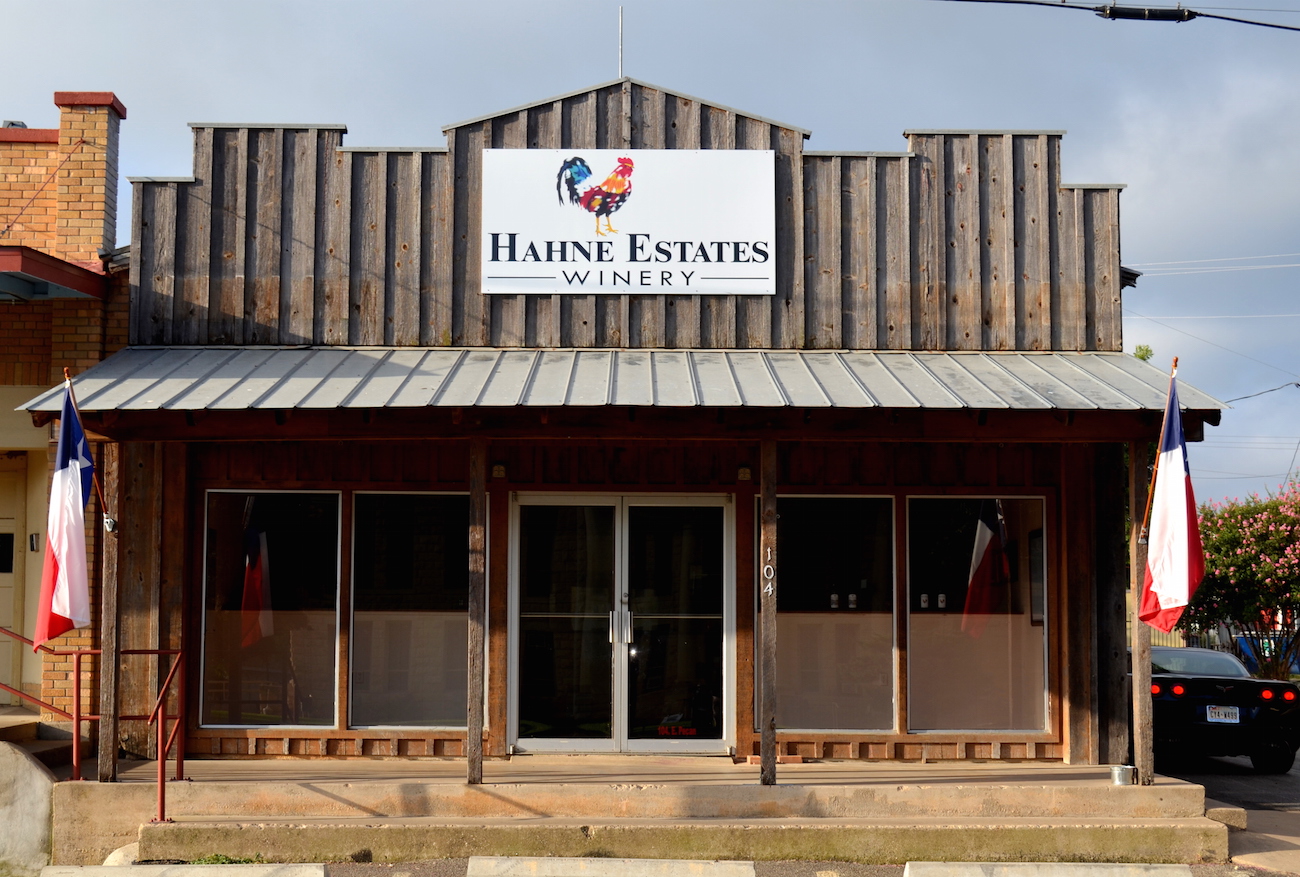 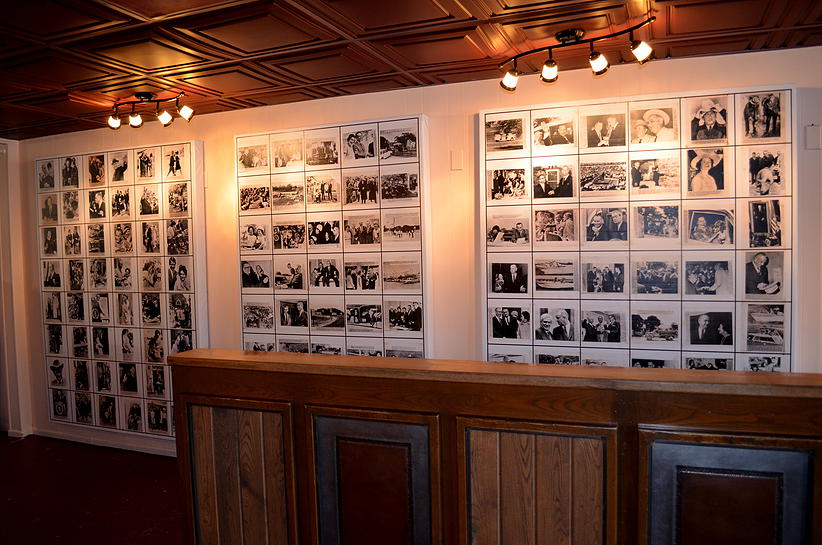 In 1862 my great grandparents, Henry and Clara Ahrens and Henry and Bertha Birck came to the US and settled in the Stonewall community. Alma Ahrens daughter of Henry and Bertha Birck was born on a small ranch in Stonewall. Alma and her family moved to Cypress Mills 30 miles east of Stonewall in 1906. Sam Johnson, father of LBJ, owned a ranch adjacent to on the south side of the Birck property during these years.

Beginning in the year 1917 Sam Johnson and his wife traveled from Stonewall to Austin. They would stay overnight at Henry and Bertha Birck’s home.

On March 26, 1919, my grandparents Alfred and Alma, were married. During the 1920’s Alfred was quite a polo player and played in tournaments around the state of TX. During the mid 20’s and 30’s my Alfred owned the only cotton gin in the Stonewall area. He also was the local carpenter in the Area building many houses and barns for local residents. In 1928 Alfred laid the cornerstone and built the Trinity Lutheran Church on the Pedernales River which lies across the river from the LBJ ranch and cemetery.

During the 30’s Alma attended many political rallies. These were held in the area for the LBJ campaigns. She talked a great deal about her conversations with LBJ.

Tillie Ahrens daughter of Alfred and Alma, married Kermitt Hahne on July 22, 1942. In 1947, they moved to a home on what is now known as Ranch Road 1. They then built a café and service station on the adjacent property. LBJ came into the café on many occasions to visit. Over the years a great friendship developed among the Ahrens, the Bircks and the Johnsons.

In 1949, Kermitt Hahne planted a peach orchard in Stonewall. Peaches then became popular in the Stonewall area.

During the years of 52-55, LBJ often brought gifts to the people of Stonewall.

In 1955 Hwy 290 was built, relocating downtown Stonewall. At that time Kermitt built a new café and service station on the highway. The station also housed the Kerrville Bus Station. During the late 50’s Lucy Johnson, daughter of LBJ and Lady Bird, was going to school in Austin. She often road the bus to Stonewall with Lady Bird would pick her up at the station.

Beginning in the mid 50’s, Kermitt was selling his peaches to HEB. Grocery. Alfred Ahrens, who made wine all his life,, would yearly make a 60 gallon barrel of peach wine for the owners of HEB.

In Aug. 1960, a memorable event occurred. As LBJ was returning from the Democratic Convention in San Francisco, 50 people from the Stonewall area, greeted him at the LBJ ranch as he landed. It was then he was nominated for the Vice Presidency of the US.

In 1961, LBJ opened his birthplace, located on the LBJ ranch, to the public. Tillie Hahne and other local women decorated and served as hostesses of the birthplace. LBJ bought the property surrounding the ranch. He commented to Tillie that he didn’t want it to become like the Eisenhower property which was filled with retail stores.

Until Sept. 1963, the Hahne’s had the café on HWY 290 leased to someone else for operation. Oct. 1 of 1963, the took over the operation of this café until finding another person to lease the café.

After the Kennedy assassination in Nov. 1963, the small town of Stonewall took on a drastic change. The many people who accompanied Pres. Johnson when he returned home, found Stonewall to be very uncomfortable because they were accustomed to having Boston as their second home. Now, it was Stonewall, with no hotels, no living quarters, one local café, one service station, a post office, a local grocery and dry goods store, and nothing for entertainment that someone from a big city would appreciate. Needless to say, there were several hundred disgruntled staffers who had to make Stonewall there second home. At this time, Kermitt Hahne made the statement, “I will make them learn to love Stonewall.”

This began the monthly parties and activities that Kermitt hosted to make the visitors feel at home. A very close relationship developed between Kermitt and Tillie, and the LBJ staff, Air Force One pilots and Secret Service agents. One Christmas party is particularly memorable in that Lem Johns, head of the Secret Service, called my dad and said, “Hold off until the weekend because LBJ is bringing our wives down for Christmas and we want them to be at the party.” It was quiet a party with over 300 people attending. This is 5 times more than the entire population of Stonewall. Kermitt cooked chicken fried deer meat for the dinner and put together a local group of musicians to make a band. (They had never played together before.) Doris Thornhill, wife of Air Force One pilot, Paul, commented to Tillie, “Now she knew why their husbands all looked forward to coming to their Texas home .

Joseph, known as Pepe to all, and engineer of Air Force One, would call from the plane and say, “We are in route to Texas,” and would tell Kermitt, “We are coming home.” Secret Service would always tell Kermitt not to tell anyone they were coming in. Dad was always the first to know.

Aug. of 1964 the local residents of Stonewall planned a birthday party for LBJ which began as a small celebration. It ultimately had to be moved to the local rodeo arena which was built by Alfred Ahrens. Over 10,000 people showed up with no advertisement of the party. Also in 1964, the Hahnes built The Stonewall Motel to accommodate the Secret Service, pilots, staff members and some of the press corps. One of the motel rooms was designed for the Associated Press with a dark room attached. This was so they could develop pictures and send out to the newspapers. These pictures were collected by Kermitt for his own personal library. Many trailer houses were located to the adjacent property for other staff members. Despite not having the luxuries of exclusive hotels in Boston, they learned to love Stonewall and saw it as their second home.

United Press International rented a small used trailer for their headquarters for press staff and photographers.

In 1967, the Secret Service approached me and stated that LBJ was not going to run for re-election. This was several months prior to the public announcement. They told me that if my parents wanted to visit Washington while LBJ was in office, they needed to do it now. I should purchase a one way ticket to Washington and they would take care of the rest of the trip. The SS gave them the royal tour as they visited Washington. My parents called often asking me how they would get home. After 8 days in Washington, the SS called my parents at their hotel (across from the White House) and said, “We are coming to pick you up and go home.” They took them to Andrews Air Force Base and got on Air Force One and came home.

A month after LBJ left office in January 1969 Henry Ford delivered to Stonewall an original Model T Ford. It was delivered in an 18 wheeler. No one knew what was inside the trailer. The driver invited Kermitt to go in the trailer and view the car but asked him not to tell anyone. Dad did, however, tell his wife Tillie, about it. The next day, LBJ called Kermitt and asked him to come to the ranch. He didn’t know why and was afraid it was because he had told Tillie about it. Instead he spent the entire with LBJ discussing the future of catering all the LBJ functions at the ranch. As Tillie was worrying about where he was all day, Kermitt was touring the ranch in the white Lincoln convertible discussing plans. LBJ told Kermitt, “I want to make you the most notable barbecuer in TX.”

From 1969 until the death of LBJ in 1973, Kermitt and Tillie catered all the LBJ functions. At one of the earlier functions Kermitt and Tillie were serving pies and LBJ commented that he wanted the pie warm. Not having a way to warm the pies, I had to run to the restaurant to get the microwave so that we could serve warm pies. As they were served LBJ stated to the guests, “Bird, this is the first damn time that anyone ever got the pies warm like I like them.” He saluted Kermitt as he made the statement. It was also fun to make the homemade peach ice cream melt as it reached his table.

In 1969 at the dedication of the LBJ National Park, across from the Texas White House , Kermitt, Tillie and family served at three different functions. The first was the dinner for LBJ and his special guests of about 200. On the river bank we served an additional 800 invited guests and across at the park we served over 10,000 people.

Nov., 1972, LBJ called Kermitt to come to the ranch. When he arrived they boarded a helicopter and flew to the second ranch located at Lake LBJ with the purpose of touring that ranch. He wanted Kermitt to do the landscaping and plant trees. Shortly after the death of LBJ, Kermitt was diagnosed with cancer. For his remaining years, Kermitt enjoyed and took great pride in driving a tour bus on the ranch. He could tell the guests all of the many wonderful stories about his life and the history in the Stonewall area.